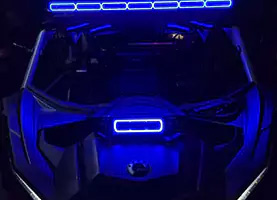 When installing LED fog lights on your car, you'll need to understand the rules regarding their use. While they are not illegal in the United States, they are a risk to other drivers, as they could be seen from a distance. Also, you may want to consider their effect on road markings, since they emit a yellowish light.

Multi-color LED bulbs are a great option for fog lights and daytime running lights. They offer the convenience of changing color patterns using your smartphone. They are also available in white and off-road versions for different conditions. You can also get them with extra features like curve detection and adaptive headlight function.

Typically, fog lights are fitted on the front of a vehicle. They are generally found on the bottom of the front skirt, on either side of the radiator grille, or in a special recess. They are intended for use when normal headlights are not adequate for visibility in certain conditions, such as when driving in heavy rain or on dark country roads. Fog lights are available as accessories and are optional in the UK, but new cars are required to have one rear fog lamp.

They increase visibility of road markings

When rgb fog lights are turned on, the driver's view of the road is enhanced. This is especially helpful when driving in fog-filled conditions. They also improve road marking visibility. However, they should only be used when driving slowly. In some states, the use of fog lights is illegal.

There are various types of fog lights with different colors and temperatures. In the color temperature scale, yellow is warmer than white, while white is cooler. Using this color, the driver can easily see road markings.

They are energy efficient

LED fog lights are energy efficient, and have several advantages over xenon and traditional light sources. They use less power, have a longer lifespan, and are perceived as less blinding in fog. The disadvantage is that LEDs are not easy to replace. These lights are mostly used in rally cars and other vehicles where visibility is poor.

LED fog lights use low-power LEDs, which are capable of producing white light. The colour temperature of these lights can be regulated to suit the desired effect. They are energy efficient and can be controlled via smart controls, making them ideal for a wide range of applications. Depending on the manufacturer, some fog lights may have additional features, such as dimming, which helps drivers make better decisions about the brightness of their lights.

They emit a yellowish light

Many fog lights on the market today emit a yellowish light. This is to give drivers better visibility in foggy weather and reduce the risk of accidents. White lights, on the other hand, emit a much more glaring light than yellow, and this can be very dangerous in low visibility conditions. Additionally, they scatter less light and do not illuminate higher in the field of view.

Yellow fog lights tend to reduce eye fatigue. This is especially useful during hazardous driving conditions, where glare can make driving difficult or impossible. The white light of a fog light is much brighter than a yellow one, but that brightness may not be necessary in every situation. In any case, the benefits of yellow lights outweigh the drawback.

They are not a replacement for headlights

While RGB fog lights may look cool, they are not a replacement for headlights. This is due to a few key issues. First, they must be angled downward. This is important as it prevents them from being visible to other drivers. Second, the red lights must not be visible from the front of the vehicle. Finally, they must not give off concentrated beams. In addition, they should not rotate, pulse, fade in and out, or flash.

They are not required by law

If you want to install RGB fog lights on your vehicle, you're probably wondering what the law says about this. While you can use these lights for personal and commercial purposes, the color of your lights cannot change while you're driving. Also, if you're going to use them in public, you have to make sure that the red or blue lights don't cause blindness to other road users.

Fog lights are supplemental lights designed to enhance visibility and improve the visibility of road markings. They should be used at lower speeds and in conjunction with other lights. In Florida, for example, fog lights are not required unless you're riding a motorcycle.